I'm sure you've used grep at some point in your life as a programmer to search for that piece of code in your code base. I was using it myself — until today. It turns out there's a better alternative to all that time spent trying to get the perfect grep alias so it works as it should: searching recursively, ignoring the .git/.svn directory, ignoring backup files (foo~/#foo#), printing out the file names and line numbers, grouping matches by file name. You've got to listen when Jacob Kaplan-Moss, creator of Django, has this to say about it:


"Whoa, this is *so* much better than grep it's not even funny."

It's called ack. Without further ado, you can install it on your Ubuntu system using sudo apt-get install ack-grep (for other distros, check out the ack homepage). Then use it as: ack-grep search_term. It's really that simple (although the default colours are a little irritating). You can see what files/directories it ignores by default using ack-grep --help. Here's a screenshot for the impatient reader: 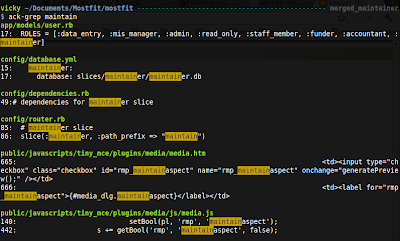